Linking people to God and to each other 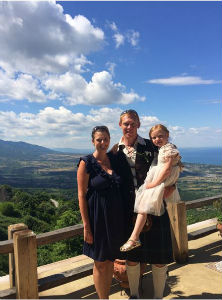 Hello, we are David (Scottish) & Corne (South-African), and we have been married since 2005.

In October 2011, our daughter Annelie came on the scene.  Her little sister Esther was born in November 2017. We are delighted with our daughters!

We have both been involved with mission work for many years.  Corne did two mission Gap Years after high school in various southern African countries.  David has been taking part in regular short term trips since he was 17.  When we met each other we both knew that there was high possibility that we would be involved in career mission work at some point in the near future.

So in 2008 we stepped out in faith and joined World Horizons on a full time voluntary basis.  This welsh based organisation seeks to work in partnership with the UK church to see indigenous church planted in areas of the world where it has never before existed - places for example like Tibet, Turkey, Morocco, Sudan, Iraq and north-west India.

Corne has had two roles as Student Worker and Gap Year Coordinator.

David is part of a small team running an adventurous short term missions program.  This mainly involves prayer focused trips to the Middle East & North Africa that are usually aimed at the 18-30 year old age group.  The overland trips, where they drive from Wales to North Africa, often have a strong emphasis on discipleship, envisioning people for the nations, nurturing faith and first time evangelism to unreached people groups.  The fly-out trips often meet with local believers before heading into unreached areas of the country to pray, worship, and to ask God to build His Kingdom and send long term mission workers.

Even though it has many challenges, we are both so privileged to be involved on the cutting edge of world mission.

You can find out more about World Horizons on their website.